This is an excerpt from the magazine Bike Magazine of March, 1975
It is about a test between a Honda SS50, Puch M50S and a Yamaha FS1-E, but I dont care much about the last two as you can imagine.

The biggest problem with sixteener moped tests is that there aren't that many sixteen-year-old journalists around to write them. In fact, to date I haven't met one. So for my sins I've spent what was to have been an evening of darts and good ale furrowing my brow over a barren sheet of paper in the dim glow of the fast approaching midnight oil. And the cause of my quandary? Honda's SS50 "not so much a moped" (more a motorbike?). 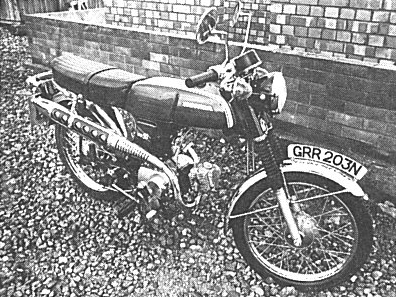 Sporty lines of the SS50 contrast strongly with its docile performance.

I've looked at this wat and that, and for my money it looks good. From the SS sticker to the short, flat bars to the upswept exhaust it looks like a fast bike - well as far as mopeds go that is, but we're still talking about the low fifties remember. The dark grey pressed steel framework is neat and the stilletto sim tank is a boy racer's dream. Those gangling pedals are a bit of an eyesore but there's enough "motorcycle" bout the SS50 for you to almost overlook them... Until it's time to swing the olf kickstarter that is. 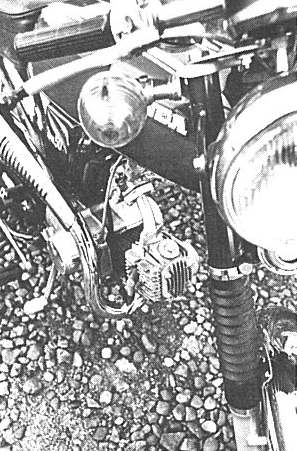 The only 4-stroke moped available for sixteeners.

Starting from cold requires full choke and once the motor fires - you have to listen carefully for it, it's that quiet - it takes a couple of minutes to warm sufficiently for the choke lever to be released. The ignition switch is mounted beneath the front of the tank on the left hand side and there is a neutral indicator light in the spedo head.

Park your posterior awile, the SS50 is a comfortale machine. Both footrest pedals are locked in a forward position that is ideal in relationship to the gear and read break pedals, and those flat bars fall comfortably to hand. They are a it on the narrow side though, measuring only 22 inches from tip to tip which, while it doesn't affect the handling or your steering ability, creates silly problems with the rear view mirrors. THey just don't stick out enough to give you a clear view of what's lumbering up behind.

Now with an ever increasing number of super-tiddlers that is no problem for, as I've already mentioned, performance-wise they're pretty rapid; enough at least to keep ahead of the lethal bumper-to-bumper urban crawl. But though SS the 50 may be by name, SS it is not by nature. Suprised? So was I; even now I can't figure why Honda have produced such a zippy looking machine, destined at a glance to cut a dash with the best on the market, with such weak and watery performance. 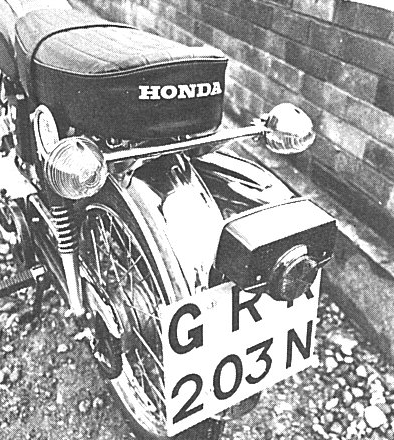 Possibly in the name of economy; you can't bitch about fuel wastage and the shrinking gallon in your tank with this baby. Probably because too many mothers' sons were wrapping their super-tiddler bolides around lamp posts and the cars of other son's mothers. The Industry seems to be going tht way. Shades of Len Setright? Right the first time. I don't care how big and bright the read light is - and it is - and I don't care how big and bright the turn indicators are - and they are - the SS50 just hasn't got the necessary urge. Necessary to get the moped rider out of the gutter where he has been for far too long, and necassary to get and keep him ahead of the four-wheeled grind.

Actually, there is a way out. There is a ridge around the top of the throttle movement. Cut it off and your Honda will discover something akin to acceleration. Sounds like a good idea after initial running in and a lot of people are doing it, but the official Honda view is a very definite NO WAY. Tamper with the carb and you're not going to have much guarantee bargaining power if the motor blows.

Back to reality - some people will buy the S50 because it is a Honda and for no other reason. If their ideal is quiet, docile, super-economic bike, then they will be satisfied. If they were seduced by its sporty pretentions, they will be disappointed. Anybody shopping arounf the sports moped market as a whole would be well advised to consider these two points.