Information about the Honda CX500 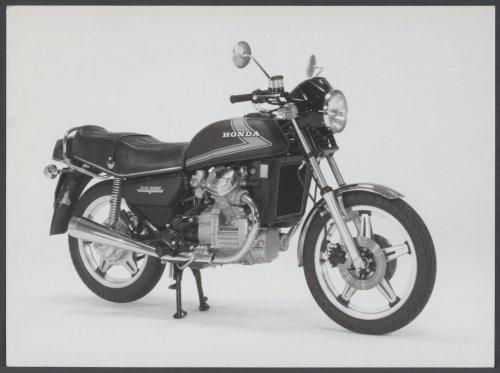 All the available data for the Honda CX500 can be found by using the search function! You can also use this for other models and it will usually yield results quicker than searching for it via the menu.

The 1978 CX500 Standard had a large fuel tank, stepped seat, a round brake fluid reservoir and a plastic mini-fairing that was thought to look unusual at the time, and gave the bike the nickname "plastic maggot". Turn signals extend out through the mini fairing from the headlight's centerline. The CX500 Standard had silver Comstar wheels, 19 inch in front and 18 inch in the rear.

While V-twins were nothing new, as Moto Guzzi had been mounting them with the crankshaft inline with the frame with shaft drive for many years, this Honda was decidedly different. Not only was the 497 cc engine water-cooled, but it had four valves per cylinder that were operated by pushrods rather than the overhead cams favored by Honda on its previous four-stroke engine designs.

The styling was radical and upright forks and a short engine contributed to a stubby wheelbase on a bike that was rather tall. The CX500 was one of the first recipients of Honda's new Comstar wheels (and later, on B models, reverse Comstar and a square brake fluid reservoir), which measured 19 in (480 mm) in front and 16 in (410 mm) at the back.

The fuel tank tapered toward the front and a huge half-moon tail light jutted out from a short fairing behind the radically stepped seat. The end result was a mix of standard, sport, and cruiser features.